Inventory items, and player stats have not really been staples of the Half-life saga so they had to be added to the mod. One of the features we've added is an endurance meter which functions similarly to player hunger in RPG's. Over time, the player's endurance decreases. Energy-intensive actions such as running for prolonged periods of time, stress-heavy situations, and healing also decrease the endurance over time. The player can refill their endurance by consuming food items and beverages scattered randomly in the game.

We also have the standard HealthPoints and Armor Items which regenerate the player hp and armor respectively. HP items are very rare in the game and can only be found (if at all) at infirmaries, hospitals or other logical locations. HP items include Health kits, health vials, health sprays, and bandages. Armor items are more common, as they are usually carried by enemy npc's and can be looted off of them. Armor decreases the amount of incoming damage, and also prevents the player from bleeding. If the player gets damaged while having little to no armor, he gets a chance of bleeding, which can only be stopped by taking health items, or by bleeding out. Some armor items include helmets and kevlar.

We then also have utility items such as Flares, flashlights, glow-sticks, gas-masks, night-vision goggles, and silencers (this is not a complete list). All of these items have their own special behavior. Some help towards combat, others with sneaking, others with health/armor.

Lastly, but definitively not least, we have our weapons. Underhell's weapon system is something of a hybrid between modern shooters and older shooters in the weapon capacity sense. The player can carry as many weapons as he wants, but he can only carry one of each type. These are all the weapon types in the game:


These are all governed by a Free-aiming and Iron-sighting aiming styles which I will demonstrate on a later post.


Click Here for a video demonstration of some (and more!) of the features I've talked about here

Posted by Carlos (Charly) Sotelo at 1:59 AM No comments: 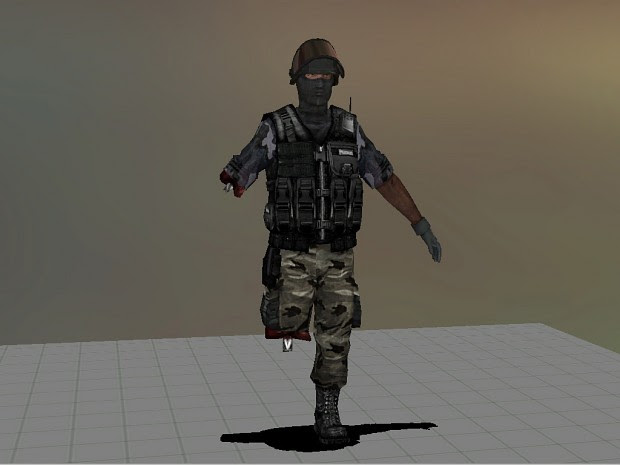 Dismemberment is one of the new features I've added to Underhell. The game take's advantage of Source's implementation of bodygroups. A bodygroup is an index of a specific mesh within a model. This index can be used to toggle the presence of a mesh, or altogether swap it out in real time.

As seen, bodygroups provide an easy implementation for gore, but also nice way to randomize the appearance (and sometimes the behavior of ) the same npc type. For example, below we have a standard soldier npc with randomized bodygroups on spawn. On spawn the following attributes are decided: health, armor, weapon, skin, extra equipment, and ( for our zombie friends) any limbs that they might already be missing. 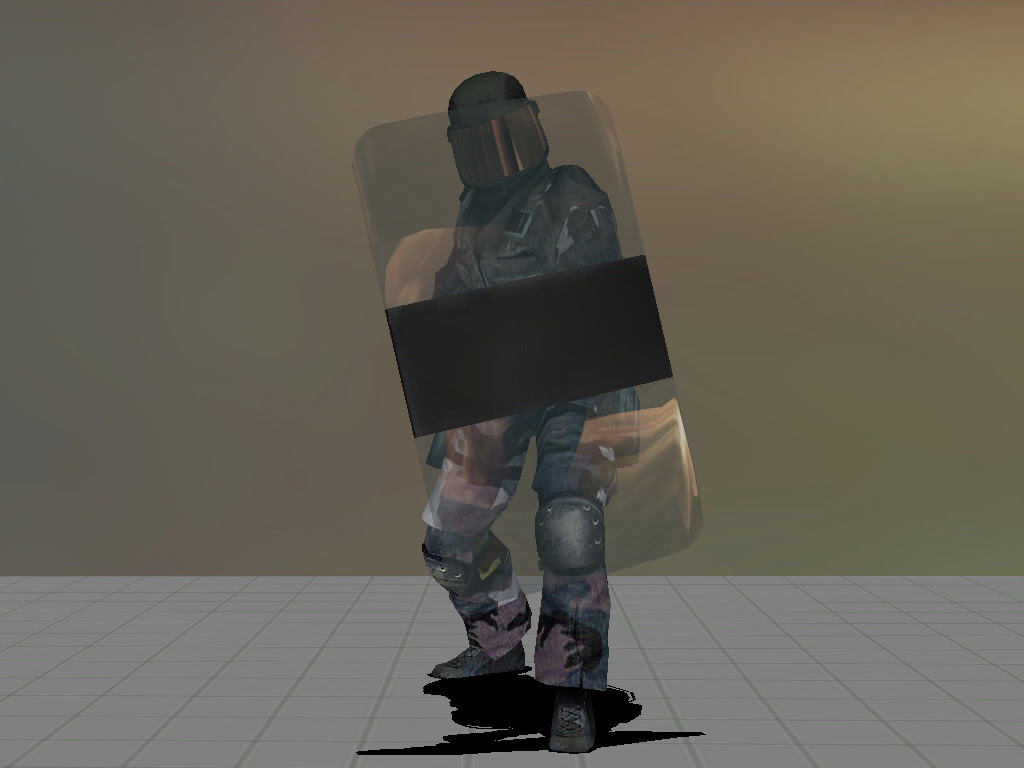 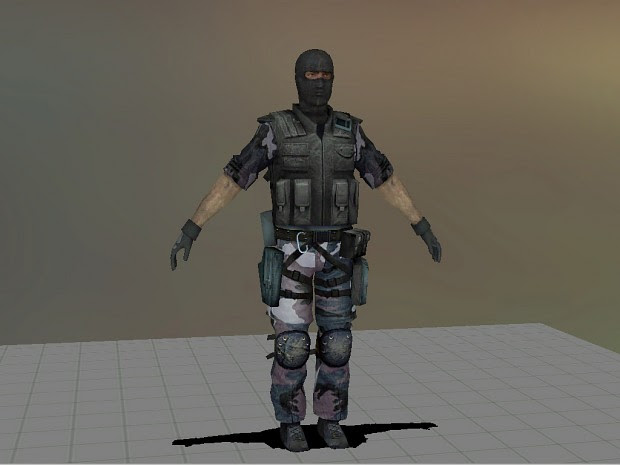 Even hitboxes are swapped out: 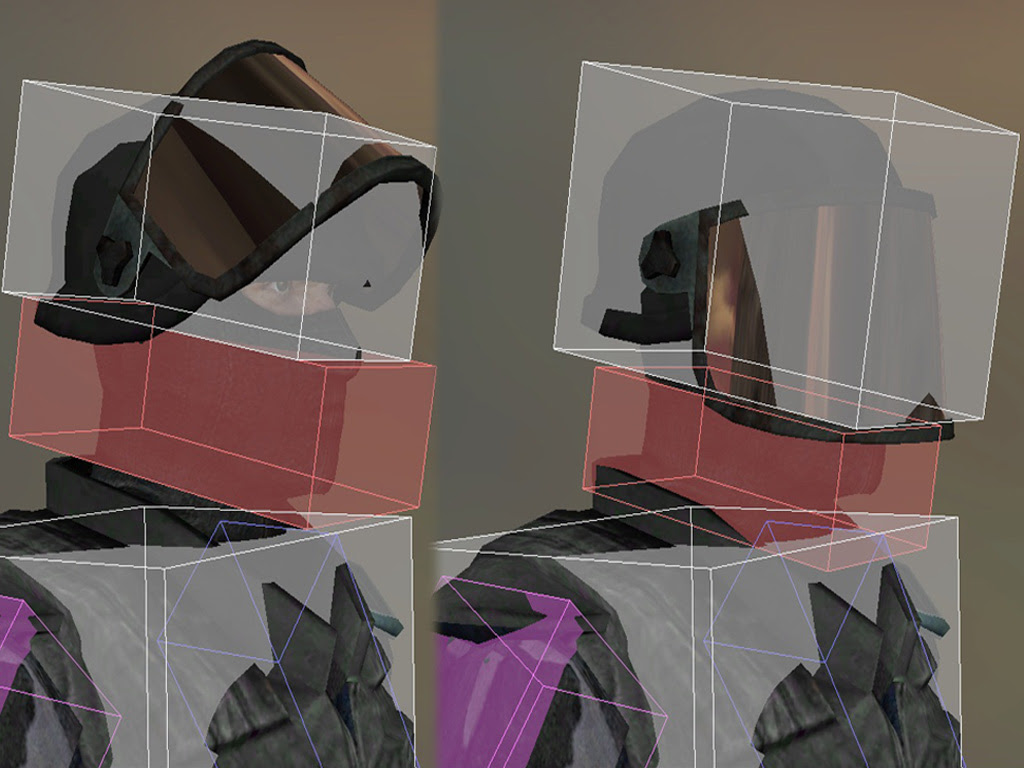 Posted by Carlos (Charly) Sotelo at 1:27 AM No comments:

After 3 months of being quiet, here is the first Gameplay Video of Underhell Chapter One, showcasing the sneaky and infiltration gameplay aspect of the game.
1 : None of the AI behavior is scripted
2 : The Dynamic Music is entirely in game until the final montage.
3 : It is still a work in progress.
Make sure to read the tutorial to Understand how this works!
http://www.moddb.com/mods/underhell/tutorials/enemy-ai-improvements-sneaky-ga...
Mod DB Page : http://www.moddb.com/mods/underhell
Website : http://underhell.wecreatestuff.com/
Steam Community Page : http://steamcommunity.com/groups/Underhell
Posted by Carlos (Charly) Sotelo at 1:42 AM No comments:

A Small Untiy3d game made by Thomas Marks and I. 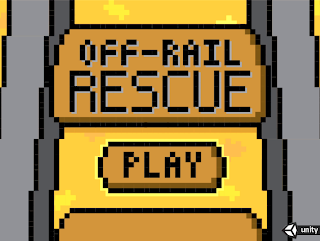 You control a ship with forward thrust and rotation to shoot asteroids, which break into smaller pieces, and score points while avoiding collision with them.

You must avoid and shoot obstacles to score points, with the same method and controls as the original but are also trying to escort and protect objects from the right side of the screen to the left to the multiply your score. Each time you make it back to the escort pick-up, you have to take more back with you.

An explosion in the neighboring boom-town has set their buildings ablaze! What’s more, its destroyed the only railway out of ton and sent flaming tumbleweeds sky high! Luckily, a local inventor has just finished his latest and greatest work, ‘The Mach-47 HeliTrain’! As the only engineer crazy enough to fly this thing, can you escort the townsfolk out of the boom-town and to safety!?!
Posted by Carlos (Charly) Sotelo at 5:20 PM No comments:

Email ThisBlogThis!Share to TwitterShare to FacebookShare to Pinterest
Labels: Unity3D 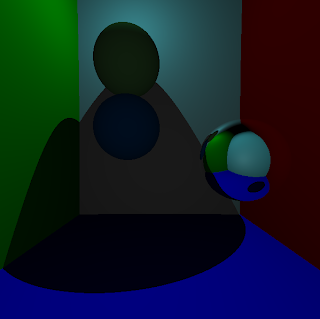 Simple raytracer that calculates colors for individual pixels. The raytracer is able to calculate shadows, diffuse lighting, specular reflection, as wells as actual reflection up to three levels of recursion. Executable found here and a sample parameter file here.

Formating for the parameters:

Posted by Carlos (Charly) Sotelo at 5:28 AM No comments:

Trailer for the Half-life 2 mod i'm coding for. Check out the already released prologue!

Carlos (Charly) Sotelo
Los Angeles, California, United States
My name is Carlos Sotelo, I was born in July 9, 1992 in Tijuana, Mexico. At the age of 11, my family and I moved to Calexico, California to live the American Dream. Not speaking much English at the time, I enclosed myself with my computer, preferring to practice my English over online games, like Counter-Strike and Diablo 2. Soon-after deciding to involve myself more in gaming, I learned to program (knowing its uses) and applied it in the First Robotic Competition, a high school competition (I was in junior high at the time). After two fruitful years in this, I decided to pursue a career in Computer Science, earning a full ride to the University of California, Los Angles in the process.